previous
For Malindo Air, October it's Amritsar, November - Perth
random
next
The 'Other Festival' in Ipoh
Destinations
0 likes 0 comments

Vienna on a budget – too little time, what must I see? After an evening arrival in a mid-Spring Vienna and a wake-up to lightly falling rain, the challenge facing us was to make the most of Vienna in the full day and half of the next that we had available. Our Must Do List included

and that doesn’t include these two

Our AirBnB landlady was very helpful as she lives in the area herself and was able to point us in the direction of the closest tramline which was a great blessing as it didn’t look as if the rain intended to ease any time soon. She also asked us to look out for the Café Zartl along the nearby Rasumofskygasse, which she said should keep us happy for coffee and cake as an alternative if we didn’t find either of the ‘big two’.

How many did we manage?

We were very thankful that we’d bought 48 hour public transport passes because we made very good use of them, especially as the rain made walking challenging each time it became heavier.

The Prater Amusement Park in Leopoldstadt was open but clearly gearing up for the summer crowds as a number of attractions looked as if they were being refurbished. The Prater Wheel was running and the Madame Tussaud’s wax museum was open although a lot of other stalls, shops and attractions weren’t. It was getting late in the afternoon and it was really chilly and beginning to rain again, so after wandering around for a while and listening to the music from the statue of the showman founder of the park Calafati in his showman’s costume with huge sleeves we went looking for something to eat.

The Schönbrunn Palace was definitely worth the journey to reach it. We may not have been able to find the strudel making demonstration, but we did manage to walk all the way through the park at the rear of the palace to be rewarded with a great view of the palace and city laid out below. We also found the delicious marzipan chocolate sold in the gift shop which suddenly made us marzipan fans.

Pretty much all of the city proper. The museums, big churches (Stephansdom, (St Stephens Cathedral) in the centre of the city for a start) If you are staying longer and want to visit a number of the attractions, a Vienna Pass may be a good idea as it will get you free entry and no queue to many attractions. The Vienna Card will get you free travel on public transport and some discount on attractions.

Coffee and torte or strudel at one of the ‘originals’. Coffee by the Danube, the Donaukanal seemed a like a possible replacement though we couldn’t find a Café.

We didn’t get to any of the concerts or visit the cemetery where Wolfgang Mozart is buried (St. Marx Cemetery in Landstraße), or visit a Klimt Gallery, but we did buy a small glass plate with a well known Klimt painting and a couple of tiny wind-up music boxes playing well known Mozart pieces along Weißgerberlände by the canal.

Walking along Löwengasse, in the Landstraße area of Vienna, we discovered the Hundertwasserhaus, which we went back to for a better look at the next morning, before we came to a picturesque Catholic Church, St. Othmar unter den Weißgerbern. At that point, we decided it was time to grab the next tram that came along!

The Hundertwasserhaus is an apartment complex built as a collaboration between the Austrian artist Friedensreich Hundertwasser (who was actually born Friedrich Stowasser), who provided the idea and concept and architect Joseph Krawina who came up with the designs. There’s also a Hundertwasser artist’s village over the road and a museum nearby.

Café Zartl is a slightly faded but authentic Viennese coffee house located at the corner of Rasumofskygasse and Marxergasse. The service isn’t the slick fast service you’d expect in one of the fancier (and more expensive) tourist cafés, but the coffee was good and we enjoyed our torte, just as much as if it had been the ‘original’. Two large pieces of cake and generous sized coffees cost us €12.90.

Rochusmarkt – a fresh and cooked food market open during the day. We bought a couple of pork shanks for our dinner, thinking they ‘don’t look that big’. We ended getting four meals for two out of them, delicious each time. The market is above the Rochusmarkt station on the U3 line and opposite the 17th century Rochuskirche.

The Rotundenbrücke, this bridge over the Danube Canal was the site of a mass burning of Jews in the 15th century and Vienna’s only witch execution was also carried out here. There is a large dog park below, on the banks of the canal. 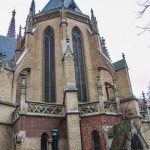 Eating on the street 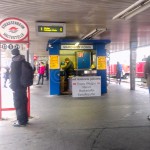 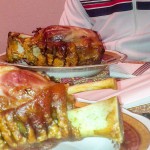 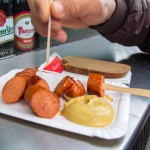 We may have missed the concert, but…

Lesley loves photography, budget travel and getting value for money, visiting places on and off the beaten track.
More Goodness
foodmarketsDestinations

Nasi Lemak Ice Cream is back at Santan

Balik kampung: a kampung homestay
Be the first to comment!
Leave a reply »