Paris on a budget – getting around Getting around Paris is reasonably easy on foot. Some of the back streets have only narrow sidewalks, but then they don’t have a lot of vehicular traffic on them, so it balances out. The main roads are well set up for walkers and even though there are a few with uneven surfaces, it’s easy enough to get around, with reasonable wheelchair access in many places. Walking along the Seine is a pleasure, with wide paths on both sides of the river, both on the river bank and at road level, for much of the city stretch, with ramp access to the river banks and bridges. We felt quite safe even at night, though of course, normal personal security is necessary.

**Tip – Download a map or carry a small paper one as the streets don’t always go where they seem to be going. While much of the city on the Right Bank is laid out in a regular fashion, it is easy to get lost in the small streets of the Latin Quarter, though in the nicest possible way!

As we were staying close enough to walk to most of the places we wanted to visit, we didn’t use the trains a lot. We did need to catch the train to and from the airport and we took one trip on the Metro to get to the Eiffel Tower and another to Gare de Lyon to catch the TGV.

The RER B is the line that you will need to use to get into the city from the airport. If you are staying near one of the RER stations as we did, it makes life much easier because you only have to negotiate your way out once through the many sets of steps in the stations. As a lot of the stations are old, they may offer only steps rather than ramps or escalators.

You need to get to Terminal 3 at Charles De Gaulle Airport to catch the train into town. If you arrive at Terminal 1, there are clear signs to the free shuttle which will take you to Terminal 3, Roissypole. The ticket counter, ticket machines  and entrance to the station are close to the exit of the shuttle and there is easy access for passengers with luggage (use the booth-like entry near the information counter if your luggage is large). The platform is down the escalator. The ticket will cost you 10€.

There is also a bus service into the city from the Charles De Gaulle airport, which terminates at Paris (Opera) and costs 11€. The bus from Orly Airport to Paris (Denfert-Rochereau) will cost you 7.70€. 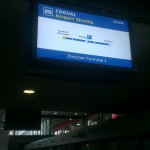 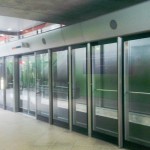 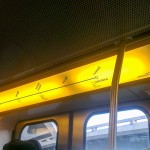 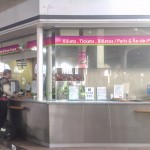 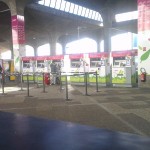 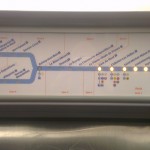 You can download a handy brochure on the RER/Metro system which helps you to identify stations, obtain information and purchase tickets. There is also information on getting about once you are within the system, how to use the entry/exit system etc.

The Paris Visite travel card is valid for 1, 2, 3 or 5 consecutive days in zones 1-3 or 1-5. The tickets allow unrestricted access to all public transport in the zones you have selected and include discounts for various attractions. The validity period starts at midnight on the first day and ends at midnight on the last day.

If you only need a single ticket, you can purchase a t+ ticket which will allow you to travel on

and you may move between metro lines, metro/RER or RER/RER and bus/bus lines within Paris as long as you complete your journey within 90 minutes. However, you may not combine travel on metro/bus, metro/tram, RER/bus and RER/tram and the tickets are not valid for travel to or from the airports. A single adult ticket costs 1.80€ or you can purchase a book of ten tickets for 14,10V.

This LINK has useful additional information about the summary above including ticket prices for different options and a link for you to buy online. 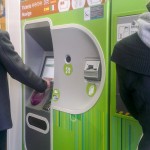 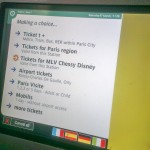 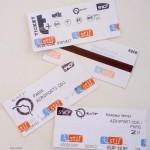 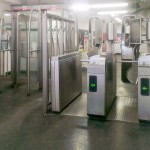 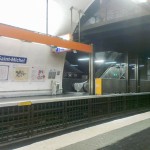 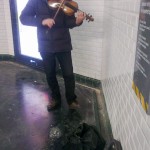 One of the almost mandatory things to do is to take a boat ride on La Seine. It’s a great way of people and place watching and the boats have individual, multi-lingual speakers so you can identify where you are.

The two main types of boat transport are the tourist cruise along the Seine and back to the starting point and the boat taxi you can use to move quickly between the main attractions you want..

The tourist cruises leave either from Port de la Bourdonnais near the Eiffel Tower or Pont-Neuf (late March / early November) and cost upwards of about 14€, depending on the time of year and the inclusions. The cruises lasts about an hour and cover the river between the Eiffel Tower and the Canal Saint-Martin, upstream of Notre Dame Cathedral. There are also lunch and dinner cruises which take longer and may cost anywhere between 60€ for a cruise of just over an hour with a simple French dinner, to a combination cruise, dinner and theatre show lasting up to seven hours or more. This may be well over 250€ per person, but something to really remember!

If you prefer the flexibility of a Hop On/Hop Off cruise, you can purchase either a one or two day pass for the Batobus which allows you to get on and off for the whole day on the one ticket. The boats have different operating hours depending on the time of year and the website has timetables, locations of the stops and a link to purchase tickets online. A one-day ticket will cost you 16€, a two-day pass 19€ and if you want a whole calendar year, you may have that for 60€. Please note that you do have to nominate the dates you want for the one and two day options. 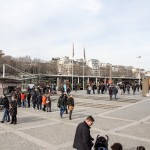 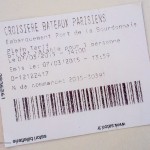 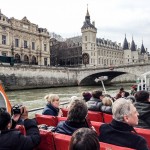 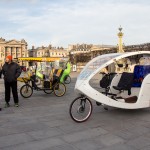 As you walk round the city, you may see various types of transport clearly aimed at the tourist market. We noticed a variety of pedicycles in the Place de la Concorde which had prices clearly listed on the side, ranging from 5€ to 15€ and up depending on the route. We also saw some near the base of the Eiffel Tower, but they disappeared very quickly, apparently when enforcement officers were reported.

There were also horse & carriage and pony rides for children in operation in the park near the Eiffel Tower. The prices for the former were clearly displayed on the side of the carriage, but we were unable to confirm prices for the pony rides although they were very popular.

You don’t seem to need a helmet (though it is recommended) or knee pads to hire a share bike in Paris. There are rental kiosks dotted around the city though we couldn’t actually see any bicycles near the one in the photographs, so we didn’t actually take the plunge. You do have a choice of languages and the operation doesn’t seem too complicated. You can also sign up online and purchase either a one day (1.70€) or seven day (8.00€) ticket. 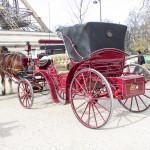 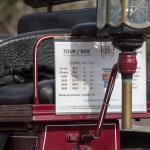 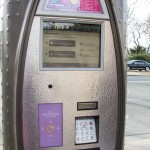 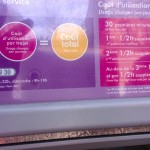 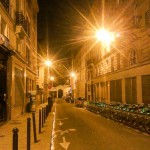 Lesley loves photography, budget travel and getting value for money, visiting places on and off the beaten track.
More Goodness
airport transportgetting aroundDestinations

Ride & Win Campaign on KLIA Ekspres
Be the first to comment!
Leave a reply »