previous
What type of fare hunter are you?
random
next
AirAsia on sale to Australia's favourite Asian destinations
News
0 likes 0 comments AirAsia has issued a warning to beware of an ‘online survey’ ticket scam currently doing the rounds on social media. Clicking on the link directs the user to a .us website requiring the participant to answer questions in the belief that they will redeem vouchers. The second scam has been circulating on Facebook, offering 268 free AirAsia tickets in conjunction with AirAsia’s 28th anniversary.

Recognising a scam can be difficult, but you must look beyond the use of a familiar logo. In this case, there are a few ‘red flags’ that should alert you, so you don’t follow the instructions, or pass it on to your friends. Don’t click on any links or to provide any personal details.

AirAsia has confirmed that both posts are scam attempts, using the AirAsia brand without authorisation to lure the public to participate in its scheme. Furthermore they state that AirAsia shall not be held liable for any claims pertaining to the false scheme. All official announcements are made via AirAsia’s official channels and credible mass media.

This is not the first time AirAsia has had to warn people. As they advised then, you should only book through official websites. If there are any special offers, this is where you will find them, not on one of these dodgy sites. 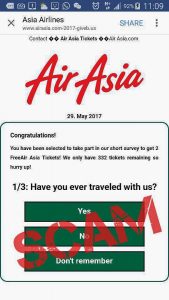 AirAsia further advised travellers that if they have any doubts, they can also report suspected scams involving the AirAsia brand, to AirAsia via official communication channels.

Lesley loves photography, budget travel and getting value for money, visiting places on and off the beaten track.
Related
AirAsiaonline scam warningAirline News

Santan offer to celebrate first anniversary
Be the first to comment!
Leave a reply »