The Selangor Crown Prince meets representatives of each group

The fifth Selangor International Indigenous Arts Festival, SIIAF2019, was launched on Saturday afternoon, 3rd August 2019, by the Selangor Crown Prince. He was welcomed by indigenous artists from various states in Malaysia and groups from Chinese Taipei, South Korea, Indonesia, Sri Lanka and Comoros Islands, East Africa. Following the launch he met participants and presented gifts to their representatives. The two day festival finishes on Sunday.

SIIAF2019, organised under the auspices of the Selangor Government and Tourism Malaysia is on now at the Taman Botani Negara Shah Alam on 3rd and 4th August. The festival is one of many worldwide, recognising Indigenous people and arts during the month of August. A stall from Taiwan

There’s a wide range of activities during the day, from 10am to 5pm and best of all, entry is free. There’s quite a large carpark, but you can also get there using a ride share such as Grab.
The large stage just inside the entrance is where you can watch colourful performances by the different groups of artists. We enjoyed a few of these, before moving on to see what else was on show. Stop in the garden beside the stage and enjoy the photographs and pat the woven tapir grazing in the grounds. Stop by the Selangor Fruit Valley Fiesta, enjoy demonstrations of traditional games and explore a traditional home. When you get hungry, there are food trucks ready to match your appetite. Visit the covered exhibition area, where the stallholders are located. It’s close to the area with the main performance stage.Many of the groups have stalls where they are selling their hand made products and indigenous foods as well. South Korea has a small stall with some pretty bookmarks for sale and they’re giving away card sheets with fold up characters. The Taiwanese stall featured mostly hand made jewellery, with finely woven detailing.
As expected, there were lots of Malaysian stalls, particularly from Borneo, where the indigenous people have a strong culture of decoration, both self decoration through jewellery, and practical products including the ever popular Penan woven baskets.
Another popular item was the Sarawak kek Lapis, or layer cake. Skillful cutting of carefully planned layers produce beautifully patterned cakes, which are almost too beautiful to eat.

We were especially excited to discover fruits like wild durian, wild mango and tarap, a type of jackfruit. The durian was much smaller than most of the familiar varieties with very long, closely packed thorns. We found the flesh tasty and quite pleasant, but quite thin around the large seed.
The mango has a brown skin and a large seed with orange flesh that’s sweetish and quite fibrous. I was told by the lady manning the stall that the seed is sometimes used to help in the treatment of cancer, but I can’t vouch for the accuracy of the information.
The tarap was a lovely surprise. It’s much smaller than it’s cousins the jackfruit and cempedak and it has a strong though not offensive smell, when ripe. The skin is covered in soft thorn-like projections, which aren’t sharp. When ripe, the skin pulls apart to reveal white grape-sized creamy ‘flavour bombs’. The flesh peels easily of the seed, which can be dry roasted or fried and eaten as well.
We were less enthusiastic about trying the still alive larvae of the sago palm beetle. One who did pronounced the experience ‘not too bad’ and even went back for seconds. Maybe next time. Perhaps. Perhaps not. 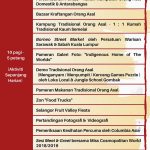 Activities during the festival The Tourism Selangor Website has more information on the festival, as well as directions  to the Park. Watch for our video on the Festival, coming soon.
images©ET
0 likes
Activities for children, Asia, Destinations, Family travel, Food, News, Senior travel, Things to do, Travel Tips
Arts FestivalIndigenous ArtsInternational Indigenous ArtsSIIAF2019