previous
Winter in Brisbane 14 things to know and do
random
next
Visit Japan: 10 really useful things to know
Guides
1 like 0 comments Phnom Penh International Airport hasrecently been rebuilt, with the new buildings opening in early 2016. By the time we passed through, any early ‘bugs’ has been sorted out and we found it easy enough to negotiate, both for arrival and departure.

The airport is equipped with sky-bridges, so you walk straight into the terminal, not across the tarmac. Signage in Khmer and English, is clear.  There are people available to direct you whether you’re a transit passenger, ‘Visa free’ or need a Visa or unsure.

When you reach the entrance to the Immigration area, you will probably be approached by one of the ‘runners’ who can assist with the process, for a fee of course. I overheard one gentleman accepting the additional charge of USD10, plus USD 2 for a photo. The process is actually easy and quick. If you don’t have a photo, you pay the extra USD 2, but apart from this, it’s just the appropriate visa fee and as it was a quiet period, the wait was only around 10-15 minutes. 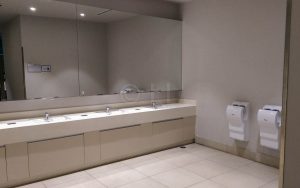 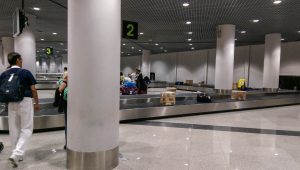 To reach the Departure lounge and departure gates, use the escalator to the right of the entrance doors. You will find the Immigration and security checks as you come off the escalator.

**Important: A number of items need to be declared (e.g. More than USD10,000 equivalent in foreign currency). Ask for a Passenger’s Declaration Form and ensure that you have all supporting documents.

Artefacts, statues, antiques and ancient items are required to have an authorisation and permit issued before the exportation by the Ministry of Culture and Fine Arts and an export permit by the General Department of Customs and Excise. 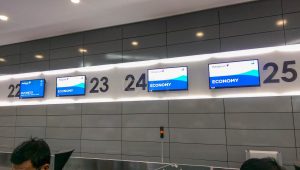 Escalator to Departure Security and Immigration

Getting to and from Phnom Penh International Airport

You can get to and from the airport by taxi or three wheeled vehicle (tuk-tuk). A taxi between the airport and most parts of the city will cost you from USD 9, rising to USD 12 and USD 15 if you need to travel outside the main city, or across the river. Pricing may vary within the area depending on distance and traffic.

A new rail service connects the airport with the main station in Phnom Penh. The fare each way is US$2.50. We haven’t tried it yet, but it certainly offers an alternative if you’re unsure about the other options.

We caught a tuk-tuk, which has pricing starting from USD 7. If you want to make a detour on the way to your destination, be prepared to negotiate upwards, especially if it will make the journey longer.

Use the services which are waiting at the designated pick-up areas. The drivers will have uniforms and their Registration details will be displayed. If you are able to communicate with the driver in a common language, it may be useful to get his number so you can use his services later to get around the city and later return to the airport.

To get back to the airport, you will pay a premium if you book through your accommodation. Taxis and tuk-tuks normally wait near hotels and hostels.There is a large transport hub for cars / taxis / long distance buses at the New Market, the large yellow market in the city.

There is no train services to the airport, and there is no formal bus service within Phnom Penh. Plaza Premium have airside lounge facilities in Phnom Penh International Airport. You can find them in the Departure Lounge, opposite Gate 9.

You have plenty of choice of Duty Free stores in this airport. There’s a wide choice of international goods, as well as local handicrafts, food and souvenirs. The local products are more expensive than those in shops downtown, but there’s a good range of high quality items. 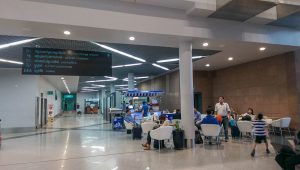 Seating and cafe in the Departure Lounge

We weren’t really looking for food on arrival, as we were more focused on getting transport and phones connected. However, when we were leaving, we found quite a few options, both in the Departure Hall and after you pass through security into the Departure Lounge. Here are some useful practical tips to get the best out of your visit to Cambodia. You can also get more information from the Airport website.

Lesley loves photography, budget travel and getting value for money, visiting places on and off the beaten track.
More Goodness
airportPhnom Penh

Penang Airport: what you need to know