Malindo Air teams up with All Nippon Airways Malindo Air & ANA have inked an Interline partnership which will offer passengers benefit  seamless travel and better connectivity when travelling across both airline’s networks. ANA, (All Nippon Airways) is Japan’s largest airline. 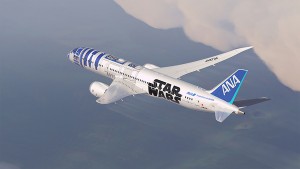 You may even get to fly in this cool aircraft.

ANA have a five star rating and add an extra two hundred routes for travellers to choose from. In return, Malindo Air brings over forty-six cities across sixteen countries to the table, including thirteen major airports in Malaysia.

This partnership is the fifth that Malindo Air has signed with other airlines after Turkish Airlines, Qatar Airways, Etihad Airways and Oman Air. Malindo Air flies out of Kuala Lumpur International Airport’s Main terminal, KLIA. This writer recently met a traveller who’d arrived on a Turkish Airlines flight from Europe. He’d connected straight across to Malindo Air’s Brisbane flight the same evening and was happy with the connectivity.

…. We are delighted to partner with ANA, one of the world’s leading airlines for its excellence in hospitality. It is indeed crucial for us, as a premium airline, to expand our route network and bring our passengers beyond KLIA with great airline partners. With ANA, our passengers will be connected to more than 200 global and domestic destinations through ANA’s hubs in Narita & Haneda. Malindo Air CEO Chandran Rama Muthy

Bookings for Malindo Air may be made online at malindoair.com or their mobile apps. If you prefer, you can also visit your preferred Travel agent to make your reservation. Join the Malindo Air mailing list for regular updates on promotions and offers. Check out the ANA website as well. They have a number of flights into KLIA out of Narita/Haneda at different times of the day.

Lesley loves photography, budget travel and getting value for money, visiting places on and off the beaten track.
Related
All Nippon Airways (ANA)Malindo AirAirline News

Star Wars takes to the sky with ANA
Be the first to comment!
Leave a reply »