Malindo Air took off for their eighth international destination on Thursday morning 19th November 2015, landing in Perth in mid-afternoon to the traditional ‘water salute’ given to the first or last flight of an airline to an airport, as well as other notable events.

The new route will use Malindo Air’s narrow-body Boeing 737-900ER aircraft for the eleven weekly flights, although the initial flight used one of their B737-800 aircraft, which carries 162 passengers to the 180 carried by the Boeing 737-900ER. Both variants use a dual class layout, with leather seats, up to date inflight entertainment technology and wi-fi available on board.

At a reception in the Perth Convention Centre in the evening hosted by Tourism Malaysian, CEO of Malindo Air Chandran welcomed those present and hinted at future plans.

…We are continually expanding our services to include new regional and international destinations. We are ecstatic to add Perth to our route network because Perth remains one of the most popular business and leisure choices among Malaysians. Malindo Air will therefore add both seat capacity and choice for travellers between Malaysia and Australia. Malindo Air CEO Chandran 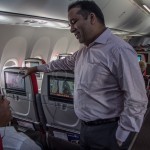 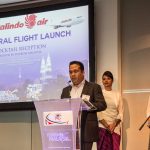 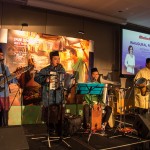 All timings stated are local time in 24-hour format. There is no time difference between Kuala Lumpur and Perth.

Book your tickets via the Malindo Air website, call +603-7841 5388 between 7am and 11pm daily, or use their Mobile site. You may also download the Malindo Air App on Google Play and App Stor

Economy Traveller flew to Perth on this inaugural flight courtesy of Malindo Air.

Lesley loves photography, budget travel and getting value for money, visiting places on and off the beaten track.
Related
Malindo AirPerthAirline News