SIA and Air New Zealand will extend their joint venture alliance following the renewal of the regulatory approval. The New Zealand Ministry of Transport’s decision allows the two flag carriers to extend their alliance another five years until March 2024.

…. The decision to re-authorise the alliance reinforces the benefits it has delivered to the New Zealand market in its first four years. We look forward to continue working closely with our alliance partner Air New Zealand, to provide even more travel options for our customers. Singapore Airlines Senior Vice President Marketing Planning, Tan Kai Ping

Since the launch of the alliance in January 2015, there have been various customer focused benefits:

….. The approval reaffirms the airline’s alliance strategy. Partnerships such as this have been key to successfully growing Air New Zealand’s international network and delivering important benefits to our customers. Singapore Airlines has been a strong alliance partner and we are excited at the opportunities the re-authorisation provides our two airlines. Air New Zealand Chief Strategy, Networks and Alliances Officer, Nick Judd 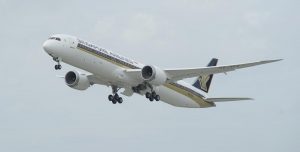 Virgin selection on 48 hour sale
Be the first to comment!
Leave a reply »