Penang on a budget – fill a morning After breakfast, set off as early as you can and head off to Weld Quay (Pengkalan Weld) – the ferry and cruise terminals are here and many of the buses terminate here as well. On the seaward side of the road (there is a pedestrian walkway just in front of the Ferry and Bus terminals), walk with the sea on your left. There aren’t really any footpaths, but there is plenty of space to walk. You are looking for the Clan jetties, some of which are well over a hundred years old and have grown as the families grew. The main jetties belong to family clans for the Chew, Lim, Tan, Lee and Yeo families, with one more jetty for mixed families. The original residents of the jetties were immigrants from China who were working in trades associated with the sea, as fishermen, boatmen or odd-job labourers and porters. Living together was cost effective and made it easier for new arrivals to get jobs and make contacts. When you visit, remember that the buildings are people’s homes so please keep to the areas designated as available for public access. Many of the residents are happy to stop for a chat and many have small shops selling snacks, or souvenirs. Look out for the resident depicted in the mural outside the Chew jetty – he has a stall selling hats about halfway along the path. 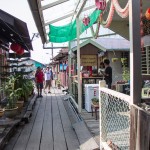 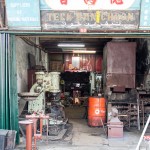 When you’ve had a good look around, cross the main road again and make your way down Armenian Street. At this end of the road are a few remaining businesses connected with the sea – there’s an anchor maker and a small foundry among them.

Stop for drink at Ming Xiang Tai Confectionary and take a photo with the 3D Wall art on the wall outside. There is also a tea shop belonging to the same owners beside the pastry shop. The pastries come in bite sizes and well as regular sized with familiar coconut and pineapple in the list as well as some more unusual ones. Look too for the pig’s head shaped pastries packed in a little basket. The soyabean milk is tasty and comes with syrup in separate containers so you can add to taste.

Don’t dally too long, because there is still the rest of this heritage area to see and even a morning will not really be enough.

A number of long established local families have their clan houses in this area, one of the best preserved in that belonging to the Khoo family. The Khoo Kongsi complex consists of a courtyard accessed by a small easily missed entrance on Canon Square. As you walk in between the two rows of double story terraced houses (for family members and recently restored) you can be deceived into thinking that there’s not much to see. Get your entrance sticker (RM10 for adults) at the small booth at the end of the row of houses and as you enter the main square you can see the building where family tablets are kept. These tablets (usually wooden) record the name, dates of birth and death and generation for family members and are a little like a tombstone in addition to what is in the graveyard. Have a good look around the family temple with the stage for opera performances in front. Rub the heads of the monks at the bottom of the steps and have a look at the miniature Sikh guards watching out from the verandah. 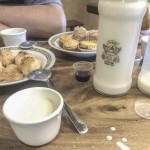 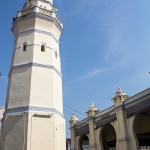 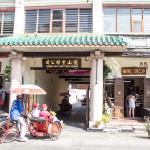 The entrance to the Khoo Kongsi If you still have time, it’s also worth stopping in at the Jln Acheh mosque, to the left as you exit the Khoo Kongsi, the Tan family Temple on the corner to the right, or the Hock Teik Cheng Sin temple just round the corner, back in Armenian St. Another place of interest to history buffs may be the Sun Yat Sen museum in what served as his base in Penang when he was raising money to fund his revolution in China early last century.

This will keep you very busy for a morning, or if you have a full day, you can stay longer in each place and easily fill a day in this part of town.

Lesley loves photography, budget travel and getting value for money, visiting places on and off the beaten track.
More Goodness
George Town PenangmuseumAsia

6 things not to miss at George Town Festival 2015
Be the first to comment!
Leave a reply »