Harry Potter and the Cursed Child hits Melbourne: Our take Update, November 2021. Covid-19 really messed up everyone’s plans over the past 20 months or so, so you’ll be pleased to know Harry Potter in Melbourne is due to reopen on 18th November 2021. But only for fully vaccinated patrons. The ticket link is on the top right of the Information page, or you can click HERE to get your tix for Harry Potter in Melbourne. They’ll also tell you about exciting developments for the show, happening next year.

Harry Potter in Melbourne? Yes! ‘Harry Potter and the Cursed Child’ opened in Gala fashion at the Princess Theatre on Saturday 23rd February 2019. This followed a month or so of Preview Shows since mid-January. (That was way back in 2019, folks!)

Probably any self respecting fan of the J. K. Rowling series of stories already knows all this, especially if they live in Australia, New Zealand or much of Asia. For the rest of us, you may need to find a reason to go, like ‘Is it any good?’ ‘Does the story stand up?’ or even ‘Can I manage two separate performances, whether both on one day, or over two?

But first, an admission. This writer is neither a ‘Potterhead’ (a fan, possibly even a fanatic), nor one who’s read any of the books or seen any of the movies. However, I did discover that I, like most in the real world, am a ‘Muggle’. That means a non-magical person apparently, a term coined by J. K. Rowling herself.

Harry Potter in Melbourne – what you need to know

This is a stand alone story. While you’ll see your familiar characters from the books, there are some new ones. It’s specially written for the stage and doesn’t have a book or movie version in the waiting. This helps to #keepthesecrets so others who come to the show will be surprised and enjoy the twists and turns.

Based on an original story by J. K. Rowling, Jack Thorne & John Tiffany
A new play by Jack Thorne The Princess Theatre restored to glory 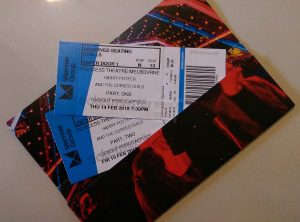 So who should go?

To make it easier for those who are ‘thinking about it’, worried they ‘won’t have a clue’, or ‘conscientious resisters’, here’s a breakdown into 6 basic groups of folks who may be considering going. Or not. Some groups overlap and some people fall into more than one group.

This writer attended a preview show where media were invited for the first time. Like everyone else attending, we also have to keep the secret. But we also had to not tell anyone we’d been to see the show until now. As previously indicated, I belong to Group 3 above, but I do love live theatre. I struggled a little during the first Act (the part before the intermission on Day 1). There was a lot of action, movement and magic that kept me on my toes, but it took me most of the Act to sort out who’s who.

By Act 2, I was sorted and was able to follow the action and get an idea of the developing story. After a good sleep and a think about the plot and putting things in place, Acts Three and Four were much easier to follow. I was clapping as loudly as anyone else in the theatre when it was time to do so.

I must give top marks to the story development and acting. The stagecraft was truly amazing (in the old-fashioned sense of the word). Scene changes likewise. So as not to give anything away, I’ll just say the play keeps you on the edge of your seat. You should expect to leave the theatre feeling it was all worth it. There is definitely something to excite and inspire people from every group mentioned above.

On a tight budget?

Each Friday, 40 tickets for every performance the following week will be released via TodayTix. These are some of the best seats in the theatre at $40 per part, per ticket ($80 total for Part One and Two). The tickets are known as ‘The Friday Forty’. Gareth Reeves as Harry Potter in the Australian premiere production of Harry Potter and the Cursed Child. (Matt Murphy) The upstairs ceilings – no details overlooked

Lesley loves photography, budget travel and getting value for money, visiting places on and off the beaten track.
More Goodness
MelbourneDestinationsFamily travel

The Mornington Peninsula, Victoria: 6 cool things to do

Malindo Air adds Melbourne from June 2018
Be the first to comment!
Leave a reply »