previous
Do I need a Visa? - UK and Europe
random
next
Penang on a budget - getting around
Destinations
0 likes 0 comments If you arrive in Penang in the early afternoon and are ready by about two or three o’clock to go for a look around, here are a few suggestions that should fill the time quite adequately until the evening.

The city is actually correctly referred to as George Town, but when people refer to ‘Penang’, they generally take it to mean the city, the whole of the island or the state depending on the context. Usually people refer to areas other than the city area by name – Bayan Lepas (near the airport), Ayer Itam (Kek Lok Si Temple and Penang Hill) Tanjung Bungah and Batu Feringgi (the beaches along the northern shore), Pulau Tikus, Balik Pulau and numerous other areas.

Start your trip at the new Colonial Penang Museum in Jln D.S. Ramanathan (Scott Rd) in the Pulau Tikus area. This is one of the older areas of town, with the roads shaded by old plane trees and older homes that date from early in the last century. The museum is in one of these old houses, set well back in a large garden which is being developed with artefacts including a collection of iron verandah columns originally imported from Scotland.

The privately run museum houses the personal collection of Penangite Jasmine Tan, who decided it was time to share her eclectic collection of items collected over many years. You will see furniture which used to belong to colonial families who sold beautiful pieces they were unable to take ‘home’ with them, a remarkable doll collection and such unusual items as kerosene powered heating fans – yes, they were useful when the owners went on visits to the ‘hill stations’ for some cooler temperatures.

There is a shop in the rear of the main house in the old staff quarters where you can find local snacks (try the preserved nutmeg), souvenirs crafted by local artists and when we visited, construction was underway on tearooms, very welcome on a hot afternoon.

After you’ve finished, head to Lorong Burma. Turn right out the gate until you reach Jln Cantonment. Turn left and when you reach Jln Pasar, turn right so you can stop at one of the coffee shops for a quick glass of something cool.  Left down Solok Moulmein and across Jln Burma – you’ll see the Pulau Tikus Police Station in front of you on the corner of Lorong Burma. Walk to the end of Lorong Burma and you’ll see the two temples, one on either side. If you have a car, parking may be an issue, a taxi would be fine.

The Temples in Lorong Burma

On your left is the Wat Chaiyamangalaram Thai Buddhist Temple the main shrine and pagoda of which have been in place since 1900. We’ve visited many times over the years and although the structures remain much the same, there has been extensive renovation during that time. The most recent is the golden embellishment of the four large nagas in front of the shrine where you can see the reclining Buddha, one of the largest in the world. You may enter and walk around, at the rear you will see many cubicles for the ashes of the departed. If you have a plastic bag, it might be a good idea to put your shoes in and take them with you – there is a warning over the shoe racks to be careful though we’ve never had a problem.

Opposite is the Dhammikarama Burmese Buddhist Temple, sitting on land which, like that of its neighbour, was granted in the name of Queen Victoria in 1845 although it was founded much earlier in 1803. If you wander through the extensive grounds of this impressive temple, the first and said to be the only Burmese Temple in Malaysia, you will find a well that has been in place for over 200 years, confirming the age of the complex. Like the Thai temple, the Burmese temple features some ornate and very detailed decorative work as well as a number of features particular to this temple complex. Apart from the main hall, the complex has many other buildings including the monks quarters and the Arahant Upagutta Shrine, with decoration reminiscent of the famous Shwedagon Pagoda in Yangon.

If you continue a little further along Lorong Burma to the corner, you will reach Jalan Kelawei, another of the older roads in George Town, running roughly parallel to Jalan Burma and on the other side, the seafront and Persiaran Gurney. Jalan Kelawei is one-way out of town, so turn to the left and walk along until you see the nearby bus stop. The 101 bus runs frequently from the Ferry terminal, via Komtar in town all the way to Batu Feringgi beach, returning by  much the same route until it reaches the one-way system which takes it in-bound along Jalan Burma. Make sure you have plenty of small change. The fare is around RM2+ depending how far along you go, so ask the driver the fare and drop the exact amount into the slot as they aren’t able to give change. We’ve found most of the drivers to be quite helpful and if the bus isn’t too full they’ll often tell you when it’s your stop coming up. If you ask for the night markets, that’s a good place to start. Although the stalls seem to be manned these days by employees rather than owners, you can still have fun bargaining for the items that interest you, though be warned, if you agree on a price, it’s bad form not to buy.

If you come early enough for the sunset, find your way through one of the easements or a hotel to the beach as enjoy what is often a spectacular display with beach, casuarinas and palm trees to complete the picture.

There are plenty of food options as well. On the beach side of the road, spaced in between the hotels, you can find a number of food courts, and there are a number of restaurants opposite. Do cross at the lights as the road isn’t particularly well lit and you’d not be easy for a driver to see if you dart across. There are plenty of options apart from the hotel buffet spreads, you can either look for the local food in the food courts or restaurants – Thai, German or a steak dinner at The Ship.

Once you’ve done your shopping and eating, look for a bus stop and reverse your trip. You should be fine until around 10.30 to catch a bus quickly without too much of a wait. After a good rest, you’ll be ready for a full day looking around. Watch out for the next instalment of things to do for a day in Penang. 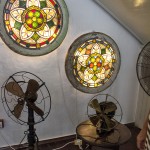 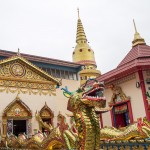 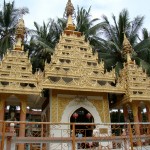 Lesley loves photography, budget travel and getting value for money, visiting places on and off the beaten track.
More Goodness
museumstreet foodAsia

Negeri Sembilan Malaysia – something for everyone

6 top things to do in Phnom Penh, Cambodia

Top things to do in Tasmania : Food and Culture

One day in Singapore – Two top tips
Be the first to comment!
Leave a reply »