Adelaide’s secrets are often clearly visible while others need to be searched out. We discovered a few on a recent visit to Adelaide, capital of South Australia, that whetted our appetite for more discoveries.

Ask! Talk to the locals, it’s not difficult to strike up a conversation in a small shop or restaurant, especially if it’s owner operated. If you go on a day trip, ask your driver/guide. They usually live locally and often grew up in the neighbourhood, close or extended. They can often tell you the back story behind incidents or places which makes the story more interesting and relevant. Read the local paper, print or online. This is a good source of information about what’s on in town and can alert you to an event or location of significance. There’s also a big board as you exit the International Arrival Hall at the airport with information. It’s a Festival city as well.

Here then, are a few of the many of Adelaide’s secrets to get you started.

William Light is the only person legally buried within the Adelaide “square mile”. He was part of Adelaide’s beginnings, right from when he was appointed Surveyor-General of the new Colony of South Australia in 1835. He selected the site of the future city and designed a grid layout of streets and parks incorporating the Torrens River. This makes the city easy to get around and offers visitors and residents multiple parks to break the monotony. The whole city centre is surrounded by parkland.

Light was the son of Captain Francis Light, founder, in 1786, of the British colony of Penang and its capital George Town. William was born in Kuala Kedah, Malaya, the same year and lived in George Town in his early years. Adelaide and George Town are sister cities.

William Light is buried in Light Square and the monument above his grave is topped with a theodolite, showing his profession. 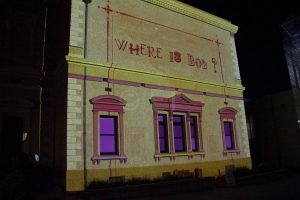 Adelaide’s secrets on the State Library 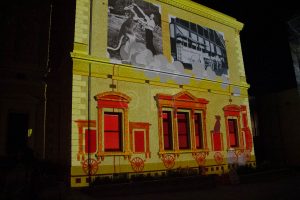 The pictures work round the windows 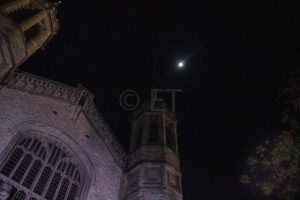 Heritage listed Bonython Hall is the Gothic styled building opposite Pulteney Street on North Terrace, built between 1933 and 1936. It serves as the “great hall” of the University of Adelaide and is used for graduation ceremonies, examinations and other large assemblies.

The benefactor, Sir John Langdon Bonython is said to have imposed two conditions:

The first was that the building must be built opposite the end of Pulteney Street. This would block any future extension through the university and parklands, preventing the division of the campus by a major road.

The second concerns the design of the building, which has a sloping floor rather than flat. Local legend claims this is because the conservative Bonython family did not want the building used as a dance hall.

This might be a little bit of a stretch. Believable though if you drive, because traffic jams are moderate by most standards. The city is easily walk-able, with good footpaths and very little undulation in the terrain – it’s quite flat. The Adelaide Hills and the beach, though in opposite directions, are easily accessible by good roads. Glenelg Beach is a tram ride away, though it is a bit longer than 20 mins.

A good way to get your bearings is to try an EcoCaddy ride. Two passengers get to see a slice of the city, complete with commentary. Ask your rider where to find the best coffee, or the best street art and you’re well away. The city public transport system has a free connecter bus available and trams within the city area are free, though not frequent.

One interesting point to note: Except for North Terrace, road names change as they cross King William St. Apparently you can’t ‘cross the King’. For example Hindley St and Rundle St are the same road, but Hindley St stops at King William St. The first section of Rundle St is a pedestrian thoroughfare called Rundle Mall, before traffic returns along Rundle St. North Terrace is exempt from this ‘rule’, probably because the ‘Street’ changes to King William Rd at this point. The same thing happens at South Terrace, when King William St becomes Peacock Rd as it goes south. Take an EcoCaddy City tour and learn as you go. Trams are free within the city area The height of activity while the shops are open. Sunday afternoon is a great time to shop, people watch, or just hang about. Or you could drop by the Adelaide City Library in Rundle Place about half way along the Mall. There’s also an entrance tucked down a small laneway – Francis Street. Rundle Mall – no they’re not real! Adelaide City Library – one of the ways in

5. Street Art of all kinds

Rundle Mall is a good place to start. Check out the commonly named “Malls Balls” or wonder at the bronze porkers foraging in a rubbish bin. The Malls Balls are an easily recognisable place to call for people to meet, locals and visitors alike. Check out our video (coming soon) if you can’t imagine.

As the city is being regenerated and back streets are becoming brighter and repurposed they are a great place to go exploring. Wile some are easily noticeable during the daytime, most are much more interesting when viewed at night. Go for a wander around Charlick Circuit and stop for a coffee, pass down Bent street beside the Police Station and admire the 3D flora on the wall. This area around Frome St has a number of interactive murals – you can even make yourself an angel. But don’t miss the State Library. Their display is only at night, using projection mapping on one wall of the building to show historical images. It’s a well developed loop of images and you can sit on the steps and enjoy the show, even on a chilly evening.

Locals head for the Central Market for a leisurely breakfast on Saturday morning, but you can drop by any time Tuesday, Thursday, Friday or Saturday for some great coffee and almond croissants (or fresh fruit, or any of the other delicious treats on offer). Some stalls open on Wednesdays as well. The first pizza in South Australia was sold in the market in the 1950’s by an Italian mum, Lucia, whose children continue the tradition and have expanded to offer a wide range of delicious Italian provisions and great coffee in their own stalls.

Adelaide’s secrets are a-plenty in the Central Market. One we like is that although all the shops/stalls sell food/produce, there are a few at the side selling other things, a camera shop for one. This is because that part of the market is right at the edge and the footpath used to be a road. So technically speaking, they are outside the market!

There’s also a shop with all kinds of mushrooms and truffles and their products. Another offers vegan sweets and healthy snacks to die for. Too many yummies to mention, it’s a  great place for foodies, but don’t forget to stop by the nut shop and pick up a bag of the roasted almonds! Locally grown and freshly roasted, they were disappearing by the bag full as regulars collected their orders. 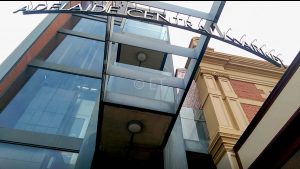 Old and new, sandstone and concrete

If the old buildings of Adelaide aren’t your thing, you may notice there are quite a number of more modern buildings on show. Some which date from the 1950s – 1970s, show the raw, unadorned style of Brutalist architecture. They have little of the style of their art deco predecessors of the 1930s or the clean lines of later styles and many are being torn down and replaced. Adelaide has a number of buildings of this type and if you are a fan, you can join a Brutalist Adelaide Walking tour.

Now you know a few of Adelaide’s secrets, it’s time to go and find some more!

EconomyTraveller travelled as a guest of Malindo Air and the South Australian Tourism Commission.

Lesley loves photography, budget travel and getting value for money, visiting places on and off the beaten track.
More Goodness
AdelaideSouth AustraliaDestinations

Head for the Hills: The Adelaide Hills

Singapore Airlines’ first A350-900 lands In Adelaide
Be the first to comment!
Leave a reply »