Qantas: Singapore to Melbourne on the refurbished A330-300 Some of the seats are showing wear after only a few months of service
A few teething problems with the in-flight entertainment system, but no deal-breakers

A very comfortable way to fly from Singapore to to Australia in economy with all the latest in gadgetry and entertainment options. A huge improvement on the older configuration.

Our flight was QF 36 from Singapore to Melbourne in May 2015. We flew on VH-QPA, the first of Qantas’ Airbus A330-300s to be refurbished. This aircraft is used to serve international routes, alongside the Airbus A330-200, of which a few have been refurbished with a slightly different main cabin – Qantas kindly refers to the cheap seats as the “main cabin” rather than “economy”. The aircraft has been through a major refurbishment, coming back from various workshops in Singapore and Brisbane with a fresh lick of paint, a mechanical overhaul and a cabin that is very clean. There is little to tell that this aircraft actually rolled off a production line 12 years ago. The palette is sophisticated and looks great with Qantas’ brand palette and crew uniforms.

Arguably the most important feature affecting an economy traveller is the seat – and the new A330-300 seat does not disappoint. The DNA of the very successful Qantas A380 and refurbished 747 seat is evident in this seat, with some improvements to boot. While a little firmer than the old seat, it is still comfortable after an overnight flight. The material is similar to that used on the A380 and refurbished 747s, but with what appears to be a finer weave. The fabric is breathable and the cushion padding adequate, however it should be noted that after 4 months, the lower seat is showing signs of pilling, and the upper seat is coming away from the shell in a few (very few) places.

Pockets are plentiful, with one pocket just below the entertainment screen providing enough room for a modern smartphone (including the cable that is being used to charge it), a pair of spectacles. We found the supplied bottle of water could also be stored in here. The standard literature pocket stores reading material on its side so as to not interfere with the raising or lowering of the tray table. A smaller pocket on the outside of the main literature pocket also provides additional storage for smaller items, including boarding passes, menus and even e-readers (including the author’s 1st generation Kindle with a chunky cover). 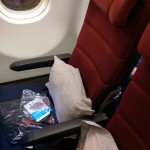 Seat as presented upon boarding. 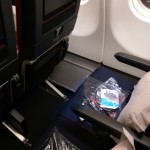 Seat area, showing the seat back. 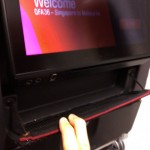 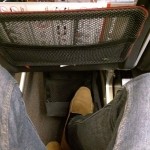 A pull-down footrest similar to that found on the Qantas A380 and refurbished Boeing 747s. 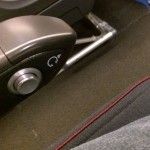 An additional headphone socket in the traditional armrest position. Tray table folded, showing a pen slot, but lacking a slot to secure a drink. 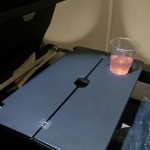 Tray table extended: the table is sturdy enough to support a laptop. It lacks a lip to stop your meal tray from slipping towards you. 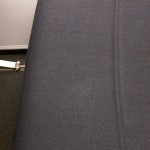 Some seats (but not all) are starting to show some wear.

Unlike the A380 and 747 seats, the armrests raise fully to be flush with the seat back when in the upright position. So whether sitting with your partner or on your own, raising the armrest effectively actually gives you a good amount of “couch” space in which you can spread out.

The tables can be unfolded into a half-table featuring a neat groove that stops pens and spectacles from sliding off the table. It comes at the cost of a cup groove, but this is easily solved by opening the table to its full extent.

The seats maintains the 31” pitch of the previous configuration, and a standard width of 17”. Underseat entertainment boxes are under the window seats (A, K) and under seats D and G (both aisle seats). It’s worth mentioning that the positioning of the seat supports and entertainment boxes has been adjusted such that there is little difference in legroom. This is a welcome and brilliant innovation.

Seat pair showing legroom and arrangement of underseat supports and entertainment boxes. These are the J/K seats.

The new seats come with a completely new eX3 system from Panasonic, featuring an 11.1 inch LCD widescreen. The viewing angle is excellent, and the colours vivid. The bottom of the screen features a USB port for charging a mobile device, as well as a double audio jack in addition to the jack in the armrest. It’s nice to have the choice of which jack to use, and happily normal headphones can be plugged into either jack to get stereo sound without the need for a two-prong adapter, so using your own favourite headphones instead of the supplied (and mediocre) headphones is possible and easy.

The touchscreen is the sole controlling mechanism, and no in-seat or seat back remote control will be found. This means that one risks having a serial “poker” keeping one awake by aggressively poking at the screen in your seat while playing games. However we found the lightest touch adequate to control the screen, and the responsiveness should prevent anyone from needing to poke to hard to get a response.

With the seat in front fully reclined, and the author’s seat in the full upright position, the entertainment screen’s angle is perpendicular to the floor, with approximately 11 inches between the screen and the author’s face, which is not ideal, but not uncomfortable. The screen angle can be adjusted so that a viewer of up to about 6ft should be able to continue watching a movie without discomfort.

A nice touch is the ability to control the volume, light and attendant call during a public announcement. All too often, we have been deafened by the inflight announcements that are louder than the movie track or music that you’re listening too. While this did not happen during the flight, we welcome the fact that these aspects of control were still available during announcements.

The selection of movies, music and television is top-notch, and the moving map is available at all times by simply swiping up from the bottom of the screen. If you’re not wanting to be distracted by the screen while you read, work or snooze, pressing the power button will give you the option of turning on Dim Mode, which displays the progress of an audio track along with the remaining flight time. 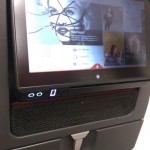 Illuminated headphone and USB sockets help you find them in the dark. Lights are activated by moving your fingers either side of the screen’s power button (bottom centre, and illuminated here). 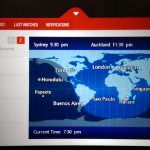 Moving map – we have yet to leave the gate, so the flight details are a bit strange. 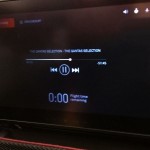 Enabling dim mode is simple at any point, just press the power icon on your screen. 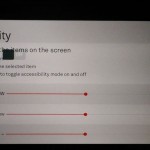 This article was largely written in-flight with both the writer’s seat and the seat in front in the upright positions. With the seat in front reclined, the writer’s 13” laptop could not have opened sufficiently to make the screen viewable without moving the laptop to a position that would then have the writer’s elbows invading a seat mate’s space. This is fairly standard in any economy seat on any plane from any airline, and we have yet to find an improvement on this, aside from being seated in a bulkhead or exit row seat.

In addition to USB power, AC power is available for laptops and other small device chargers. One socket is shared between every two seats, and is located under the seat. We find this to be a better location for a socket than a source on the seat in front of you, as it prevents a seat mate from tripping over or bumping your cables if they need to exit past you.

As with all major developments, glitches can be expected.

How to tell if your aircraft is a refurbished aircraft

If you already have a booking on a route served by a Qantas A330-300, you can check your seat map in manage My Booking. Identifying whether you have a refurbished aircraft is simple, as these are missing seats 23J and 23K. In addition to this, the old configuration places crew rest seats in 40A/B and 41A/B, whereas the new configuration places crew rest seats in 40J/K and 41J/K.

You can find our guide for getting the best economy seat on the refurbished Qantas A330-300 here.

We love this new economy seat and cabin, and along with the new Qantas international meal service positions Qantas as being a major contender for best economy cabin between Australia and Asia. The A330-300 fleet is being progressively refurbished, with all aircraft expected to be refurbished by the end of 2016. Routes expected to receive refurbished aircraft as a priority are flights between Eastern Australia and Singapore, followed by Hong Kong and then the rest of Asia and Honolulu. Until the refurbishment is complete, it’s a bit of a lottery as to whether you receive a refurbished aircraft.

NOTE: Our review of Qantas international meals will be published as a separate article.

Brian travels often, but to the same locations for work and to see family. Like many self-employed (and self-funded) business travellers, he travels economy but has picked up a few tricks to make the experience nearly as enjoyable as flying at the pointy end.
More Goodness
Airbus A330MelbourneQantas