The seats are firm but comfortable.
Curved seat back gives support
Leather seats
Good legroom as in other Malindo aircraft
Headrest stays in place when wings folded out
Toilet paper rolls are right in front of you, easy to reach
Mirrors all round the toilet, blue lighting
Overhead bins are spacious and easy to reach
Audio announcement of 'Seat belt on'
Noise level - seems quieter

Toilet is quite narrow, may be difficult for some
No entertainment unit or power supply

The aircraft will only fly certain routes, mostly scheduled charters to China and to North India, Pakistan, Bangladesh, Nepal.
Overall, a comfortable aircraft, best for shorter trips.
Longer flights may not be fun without the entertainment and no flight tracking.
With IFE and power added, it would be great.

Malindo Air’s Boeing 737 MAX 8 rolled up to Gate 1 at Kuala Lumpur airport just after 9.30am on Monday 22nd May 2017 to a traditional water salute welcome. This is the first Boeing MAX to make a commercial flight, so media and guests were very eager to see what the new arrival had to offer. This writer was fortunate to have a seat on the trip, a quick turnaround to Singapore.

After checking out the brand new plane, and having a good look at the new CFM International LEAP-1B engines with their recognisable chevrons on the nacelles of the engine cowling, company and Boeing representatives gave the new aircraft the ‘thumbs up’.

UPDATE: 11th March 2019: This aircraft has been transferred to Lion Air since September 2017. malindo Air no longer flies this aircraft type. 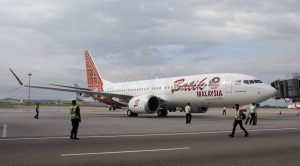 The MAX has been developed using much of the existing technology in the B737 aircraft type. The main benefit for airlines is that training of pilots is less complex and reduces the time taken when upgrading the fleet.

The most obvious difference is the change in wingtip design and the aforementioned chevrons. This saw-tooth design, also seen on the engines of big brother, the B787 Dreamliner, are there to minimise noise. It’s difficult to say if the aircraft is 40% less noisy, but if the measure is being able to have a conversation comfortably, then yes, it seems to be quieter.

The other most obvious difference is cosmetic. For some time we have seen Malindo Air aircraft sporting a traditional batik design. The confirmation came today – Malindo Air will be re-branded as Batik Malaysia in the second half of 2017. More of this will come soon.

The Boeing 737 MAX 8 delivered to Malindo Air is the first of four to be delivered this year. The second is due to arrive in the next week or so. The all-economy class aircraft carries is configured with 180 seats, three either side of a single aisle. Even with this maximum number of seats, Malindo have managed to maintain their generous legroom of 11″ and a pitch of 31″.

As you walk in, you’ll notice the Boeing Sky Interior with its calm blue lighting and the large overhead bins. The guide lines on the floor are also blue and easier to notice than the narrow pale coloured lines in some aircraft.

Individual light, air vent and call buttons are found on the underside of the overhead storage bins.

The slimline blue leather seats are firmer than those in the B737-800/900 used by Malindo, but the curved back and positive fold out headrest more than compensate. This writer found them to be comfortable and with slim armrests, in all but the first row you get to enjoy the full 19″ width. The headrest can be raised and lowered and stays nicely in place so your head is well supported.

The seats aren’t supplied with power, so you won’t be able to use your devices, unless they have enough juice in the battery for a long trip. As there is no entertainment unit fitted into the seat backs either, you will need to bring a book, enjoy a nap or hope your battery holds up.

The minimum legroom you’ll have on a Malindo aircraft is 11″. There are three rows with ‘extra’ legroom. The first row gives you plenty of foot space so it’s great for those with long legs. However, the tray table folds into the armrest, reducing the width of the seat. You do, however, have two full windows to check out the view.

This writer sat in 11D for part of the out flight, before moving to 17A. On the return trip, 30A gave me the opportunity to test the much vaunted quietness. The seats before and over the wing are definitely quieter than those in many aircraft, so I was pleased to note that apart from a short period when we started our descent, it was easy to have a conversation in a normal voice with someone a couple of rows away,

The two Exit rows in this aircraft are Rows 16 and 17. There is no armrest on the window side of the A and F seats. You’ll have around 20″ to stretch out your legs, but during take-off and landing, all your hand carry items must go into the overhead bin. This is strictly enforced.

The seats in front of both the exit rows do not recline. This means that if you’re in Row 15, you’ll have the regular amount of legroom, but no recline. Row 16 has extra space, but no recline. Row 17 would probably take the ‘best’ ticket as it has both recline and extra legroom. You’ll also have the benefit of one and a half windows in both 17A and 17F. There is the wing obstructing the view to some extent, but you can still see quite a bit in front of, and behind the wing.

Apart from Rows 15 and 16, seats in all rows recline to a comfortable position, including those in the back row. With the legroom available, the tray tables are still comfortable to use. 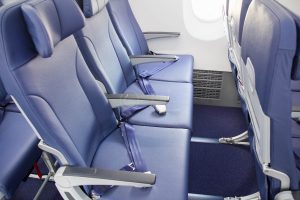 Apart from seats in Row 15, there are a few window seats which don’t actually have a window. There isn’t a window for the seats in Row 10 on either A or F side. In Row 11, there is none for the A side and on the F side, there’s only half a window. Some rows, e.g. Row 30, have one full and one half window.

On a short trip there probably won’t be many people queuing to go to the toilet, but on a longer journey, you may find that sitting in the back few rows, you’ll have people queuing for the two on board. Food is served from the front, so if you’re seated at the back, you’ll be last to be fed. 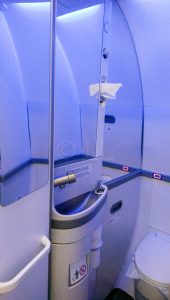 The toilets fitted on the Malindo Air Boeing 737 MAX 8 are the new style narrow units, two of which are located at the rear of the aircraft. Despite the small amount of space, which may make things difficult for larger than average passengers, of those with a disability, especially if a carer is needed, they are efficiently fitted out. The toilets are lit with a blue light and there are mirrors all around, including on the door.

For baby changing, there’s a fold down bench above the toilet. Two toilet rolls are easily accessible in front of you, within reach when needed. The sink is very narrow, but without an overhanging mirror, you can use it for important things like cleaning teeth without bumping your head! The tap is a push and auto release with hot/cold adjustment. Tissues and seat covers are easily reached and the flush button is lit and easy to press.

As invited media were able to have a good look around the aircraft before passengers boarded, we were able to test the seats and check out the various features. This meant a slight delay in departure, but once we took off it was immediately obvious that at least from Row 11, the take-off noise was reduced.

On a short flight, there’s not much time for either distributing or eating a meal. The boxed sandwich packs and packet drink was adequate and tasty. It would be easy enough to just take along with you if you didn’t want to eat it until later.

Both cabin and flight deck announcements were easy to hear. There is also a digital audio message to accompany the ‘Fasten your seatbelt’ announcements. 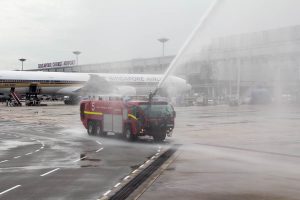 Where can I fly on this aircraft?

These first four aircraft will be used for now, on routes with less demand for the two class offering, as well as scheduled charter flights, primarily in China. The main focus however, will be on routes to northern India, Bangladesh, Pakistan and Nepal. For more info: malindoair.com

Please note: This aircraft was transferred to Lion Air in September 2017 and currently flies as registration PK-LQK.

Malindo Air launches the first Boeing 737 MAX 8
Be the first to comment!
Leave a reply »