previous
Firefly: Subang to Penang on the ATR 72
random
next
Scoot Airlines Singapore-Melbourne on the B787-800
Flight Reviews
5 likes 2 comments

Malindo Air: Kuala Lumpur to Perth on the Boeing 737 Convenient timings making it easy enough to get to and from the airports at either end and still have part or all of the day to enjoy.
On board wi-fi (paid)
USB port for charging phones etc
Food, entertainment and 30kg baggage are included in the cost.
Check-in at both KLIA and Perth was smooth

No laptop charging facilities
No headrest

A good compromise between the full fare airlines offering all the bells and whistles and a low cost airline where these are either paid for add-ons or not available.

Please Note that all Malindo Air Flights fly into and out of KLIA (main terminal) from 15th March 2016.

Malindo Air plans to service this route using their Boeing 737-900ER aircraft. However, the inaugural flight on 19th November 2015 used one of their B737-800 planes, which is the subject of this review. The two aircraft are essentially the same, with the B737-800 carrying 162 passengers and the B737-900ER having seating for 180 passengers.

With a morning flight every day leaving KLIA2 at 8:25am and arriving just after 2pm, visitors to Perth can still fit in a good look-around in the afternoon. Catching a return flight at 3pm will give them the morning to catch up on last-minute shopping or sightseeing. For those who prefer an overnight flight, you can do this four times a week from Kuala Lumpur, arriving early in the morning, and by leaving at 7am from Perth, you’re back in KL for lunch.

As guests of the airline for the inaugural flight, media were invited to relax before take-off in the KLIA2 Malindo Air executive Lounge, accessible to all Business class ticket holders. Economy class passengers may use the facility for three hours for RM65 and RM35 for children.

Shower facilities are available, but you’ll need to bring your own toiletries. The Lounge itself is located in the satellite pier building at the ’roundabout’ opposite the entrance walkway. The Lounge is small but comfortable & adequate. Brewed coffee, juice and pleasant staff, small buffet spread of nasi lemak, noodles, fruit, pastries and kueh. Wifi available with pw and four desktop computers are available for use.

The leather seats are arranged in threes, either side of a single aisle. There is no headrest, although this did not prove to be too uncomfortable for the just over five and a half hour flight, but if you have a neck pillow, you’ll appreciate using it.

With a seat width of slightly over 18″ (46cm) and a pitch of 33″ (84cm), there was no need to feel cramped. The seats recline to a comfortable angle and the armrests can be raised to tuck into the gap between the seats.

For passengers sitting in the front row of the cabin, the tray table fits into the arm rest, so you won’t be able to raise these to stretch out. Your entertainment unit is on the bulkhead wall in front of your seat.

The seats seem to be mostly well placed with good window access for most. However, a fellow traveller commented that she found her seat in Row 11 to be somewhat uncomfortable, saying she felt it was a little high, although she was unable to clarify this comment. It is possible that she was unable to recline this seat fully as it is just in front of an exit row.

Legroom is a fairly roomy 12″ (30cm) which allows for much easier access, although smaller passengers may need to lean forward more to reach their meal or make use of the workspace on the tray table.

There is no footrest, but the space beneath the seat in front is clear for all seats, as the entertainment uint is not placed here, often an issue when it takes up passengers legroom in window seats in some airlines/aircraft. 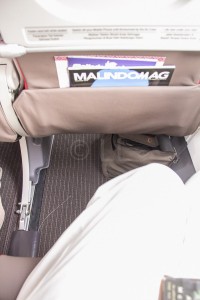 The non-fold tray table  can be pulled closer to the user during meals, or to use as a work space. There is a slight ridge at the edge, but no cup recess.

If you are seated in the front row of the cabin, your tray table is hidden in your armrest. The entertainment unit is located on the bulkhead wall in front of you. Make sure your cable is long enough to connect any charging items to the USB port on the unit.

The USB ports for all seats are located on the lower left of the entertainment unit, to the left of the earphone jack.  While working on a laptop, the space is adequate, but there is only USB charging available, so if your device requires a power socket, rather than the available USB port, you’re out of luck. 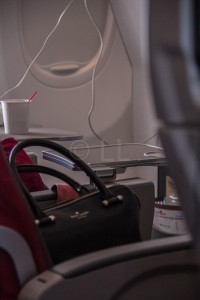 The entertainment available on board is included in your fare, you can choose from four available directories. You can also follow the flight path by clicking on the plane icon at the top of the touch screen.

Apart from ‘Directory’, ‘About Us’ and ‘Kids’ World’, the Entertainment selection offers a good mix for general viewing. There’s a choice movies in various languages as well as TV show episodes.  If you’re a fan of Ben Stiller, you’ll be spoilt for choice as he can be seen in three of the offerings available at the time of writing. 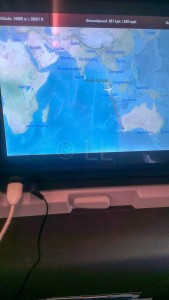 The meals were included in the fare on this flight, with two selections offered on each leg (out and return). The flight to Perth was a morning flight. The choices were scrambled egg and sausage, or Nasi Lemak (coconut rice with condiments). A small pack of chocolate biscuits accompanied the meal with a choice of juices and bottled water. Tea and coffee were offered after the meal service.

The chicken briyani meal was one of two rice dishes offered on the return journey and was satisfactory. The acar (vegetable pickle) was tasty and not too spicy for most palettes. Although the chicken appeared dry to look at, it was well cooked and moist. A bottle of water was provided with each meal.

The food comes in somewhere between that available on a low cost competitor and other full-fare airlines in terms of choice and presentation. Quality is good and portions are sufficient for an average sized appetite. All seats seem to be positioned with at least some view through a window. If you want an unimpeded view, look for a seat in the rows before the wing. In Economy this is rows 4 – 8 or Row 17 onwards, after the wing. There are two Exit Rows from Row 12 over the wing. As noted above, some passengers reported that they found seats in this area less comfortable.

There is one pair of toilets available in this aircraft type for Economy passengers, at the rear of the plane. The galley is also located here. If you are bothered by galley sounds, or people queuing for to the toilet, you may prefer to avoid these rear seats. Food is served from the front of the cabin, moving towards the rear.

Generally the flight was satisfactory, the seat was comfortable and the staff responsive and polite. My seats in both direction were in Row 5, A and F and I had no complaints about either comfort or accessibility. This is the second row in the economy cabin.  There is no entertainment unit reducing the space under the seat and I was able to stretch my legs out comfortably.

Economy Traveller flew to Perth on the inaugural flight courtesy of Malindo Air.

Lesley loves photography, budget travel and getting value for money, visiting places on and off the beaten track.
More Goodness
Boeing 737Malindo AirPerth