New Economy seats on Qantas A330 planes from December 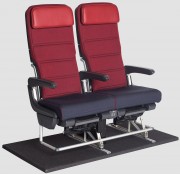 Passengers on Qantas flights on various medium haul flights within Australia and South East Asia will welcome today’s announcement by the company that they are refurbishing the interior of their A330 planes. While a lot of the effort has gone into upgrading the Business section, Economy passengers have not been forgotten. The seats will be replaced on International flights with a next generation model of the award winning Recaro seat, similar to the one used in Qantas A380 aircraft and the refurbished B747s. The company adds that “Economy seats on the A330-200s for Qantas Domestic will also be refreshed.”

Work on the refurbishment will begin in the Qantas facility in Brisbane next month with each aircraft taking approximately one month. This should see the first of the domestic flights heading the Perth from the East coast by late December and a January 2015 start for the updated international aircraft.

Lesley loves photography, budget travel and getting value for money, visiting places on and off the beaten track.
Related
Airbus A330cabin refitAirline News